When you do a Montessori program, you are required to do a certain number of hours of observation. They ask you to pick a child whom you don’t know, so that neither you, nor the child, get distracted by familiarity. You are essentially meant to be like furniture, melting away into the background and making unobtrusive notes without influencing the child’s behaviour or responses. You are meant to only write facts, reporting things as they happen rather than through the lens of your interpretations. You can only suggest an insight after consistently observing the child at various points and in various settings. While this approach makes a lot of sense, we unfortunately don’t get to observe our own children quite so clinically. While this is partly because we are biased by default,  it’s mostly because our children will simply not let us sit and stare at them for an hour at a time, watching their every move without comment!

As a parent, your windows of observation come in 5-10 minute chunks, in the time when the child thinks you’re cooking so doesn’t bother looking to see what you’re doing. Or when you are on the playground and you get to watch your child watch other people. Perhaps when you’ve spent an hour with them, and they themselves crave a little bit of down time to do their own thing. One thing I do know is that it’s hard to get into the habit of observing your own child with no ulterior purpose in mind – it’s one thing when you look to confirm a hunch or check on something, it’s another thing watching them just for the sake of watching them be. Yet, it’s a beautifully meditative feeling, if you can manage it.

G’s school used to have bi-annual conferences where they asked parents to fill out 5-6 questions about the child every 6 months. It was these conference questionnaires that led to the husband and I getting into the habit of watching G carefully, and trading our observations. Given who we are, we have a shared online doc with running notes of things that struck us 😊 We try to note things that G is enjoying/proactively choosing to do, things she’s avoiding, her communication style, things that trigger her and things that she’s attempting to work on. When you look at that information every six months, it’s remarkable how much changes! I was looking back at our notes the other day, and I could barely recognize the child whom we described.

That child, at 2.5, would stop herself from running too fast. She would hesitate to climb things, or venture very far without us. Again, part of it was her need for closeness. However, there was certainly also an underlying pattern of a lack of physical confidence. In fact, by the time she was 3, lack of practice made her movements seem uncoordinated and coltish. She barely seemed to realize how to stop herself, or gain momentum – she simply hadn’t had enough real-time feedback on her body’s capabilities. We went on plenty of play dates to play areas, but those tend to be very sanitized environments – children don’t really get feedback from falls, missteps, or uneven surfaces. Living with just two adults with sedentary jobs, in a nuclear family, in an independent house, meant that there was rarely any modeling of gross physical movements for her either.

It would have been the easiest thing in the world to put a label on it, and say, well, we have a studious child, a reader, a charmer. We have a child who isn’t physical; one who is a endearingly clumsy. The thing is though, I was that ‘indoorsy’ child growing up. I’m also the adult who trekked up Tiger’s Nest with a toddler on my back. Sometimes, a lack of ‘skill’ is merely a lack of enthusiastic exposure at the right time.

The husband and I made a few decisions to see if we could give G more exposure. For one, we started taking G to parks, and climbing less certain surfaces like rocks, trees and slopes of sand with her. Note that I said we did it too. We didn’t just point and say, “Go do it, it looks like fun!” Children aren’t fools. There’s absolutely no reason for them to get excited about something that you can’t be bothered doing yourself ! Their BS antenna is very finely honed 😊

Since we didn’t think it would help for the park visits to be one-offs, we also signed G up for a gymnastics class with a friend of hers. We wanted her to build confidence with the help of repetition, while still being pushed to learn more at each stage. If you try putting your physically reticent child in a class like this, please make sure they have a close friend along for moral support. At a certain age, they will try almost anything as long as their best friend is doing it too.

Even so, it’s best not to try tricking them into attending a class without any forewarning. We would never do that to an adult; why not extend children that same courtesy? In fact, children appreciate your orienting them with information in advance more, since they rely on consistency to make sense of the world. Any change to the order has to be spoken about and agreed on before it’s introduced, or you’re inviting a meltdown. (I got some requests to write about how G rarely has those, I’ll get to that).

We spoke to G about the class and read her many books about famous gymnasts and yoga poses. We thoroughly talked up the idea, and challenged ourselves to do small stunts at home. Finally, we invited her to do a trial class. We let her know that she could take her time to decide if she liked it or not; and that we’d leave the class if she really seemed uncomfortable. We also told her that we’d go back to try again the next day, because new things are sometimes uncomfortable, and it takes a while to get used to them. 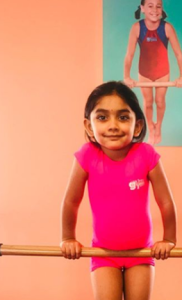 It’s a fine balance – on the one hand, you want the child to know that they have the autonomy to form opinions. You want to give them the security of knowing their instincts will be trusted. On the other hand, you also want them to push beyond their comfort zone, and challenge themselves. The only way to pull this off is to give it lots of time and patience. You cannot think about how the others in the class are probably judging you. You cannot think about how much money you paid for the class.

The only thing worth thinking about in that situation is your child – and the fact that the parenting process tends to be a marathon rather than a sprint. You can’t give up too quickly, or signal that you’re giving up to the child – they will believe what you believe. For this to happen, you obviously need to be sold yourself. If the instructor feels bossy, or you don’t trust the class – just find something that you are 100% sold on.

Finally, I realized that with physical activities (as with anything else the child undertakes!), the most important thing you can do as a parent is to step back and keep quiet. Day one on a new playground, G tried climbing up a rope ladder. The notches were a little too far apart for her to reach. I could have given her a boost. I didn’t. Much as I got dirty glares from some people around, I pretended to read my Kindle while I watched her stealthily. Fact: that ladder wasn’t high enough for her to fall off of and hurt herself. So I sat and I watched, and any time she said, “Mamma!” all I said was, “If you can’t do it yourself, you’re not ready for it yet.”

She did abandon it for things she found easier, sometimes. Other times, she would go back to the rope ladder and persevere with a vengeance. Guess how long it took? One week. In that week, not only did she figure out how to climb that ladder, she also learned how to climb two other things. I wonder what would have happened if I had helped her up on the first day? She and I would both have thought she needed my help for months together.

With a lot of physical challenges, our instinct is to help, or to say be careful, or to otherwise demonstrate a lack of faith. This is the most critical area I can think of in which to be objective and truly assess the difference between what’s dangerous and what’s a learning opportunity. Again, there’s no shortcut to it! It may well take years. Most things with children aren’t quick fixes, or even one-time fixes. The process in itself is fascinating though.

I’m not thrilled when G’s stunts have her landing on her face; she seems to get a new scratch or scab every day now. Each cut does remind me of how far she’s come though, and of how we have grown with her.